If you are looking for apartments for rent in Coolidge Corner, a neighborhood in Brookline, MA, Boston City Properties is here to help. Situated in North Brookline, commercial activity first began at the intersection of Beacon Street and Harvard Street during the 1850s. For many years, the Coolidge & Brother general store did a brisk trade from that location. Later, it became the site of the S.S. Pierce building, which was among the only major commercial buildings in the neighborhood for some time. Through the years, of course, Brookline became more and more populated – and the streetcar suburb of Boston quickly became the place to be. 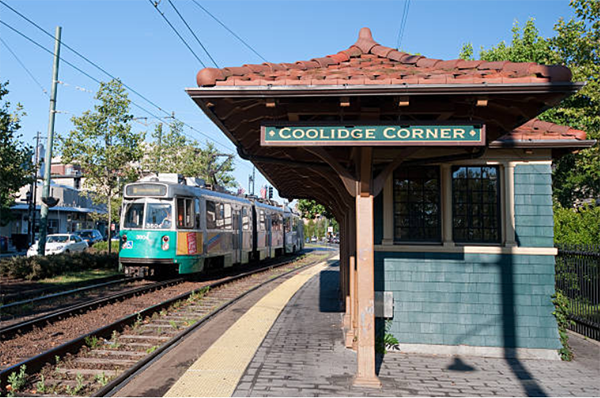 As pharmacies, coffee shops, independent bookstores, ethnic restaurants and other businesses developed in Coolidge Corner, demand for suitable housing grew. Many major national banks set up shop in the area, increasing its visibility and providing even more access to well-paying jobs. The neighborhood, which is the birthplace of U.S. President John F. Kennedy, is also known for having a significant Jewish population, and many Jewish-centric shops are found along the northern section of Harvard Street. Today, residents of this neighborhood enjoy proximity to spots like the Brookline Booksmith, the Coolidge Corner Theatre and Coolidge Corner station, the MBTA Green Line C Branch.

With so much to offer, it’s little wonder that Brookline apartments in this pleasant neighborhood are in such high demand. If you are in the market for one, you face a bit of an uphill battle. The neighborhood provides a mix of older apartment blocks along with newer luxury developments, but rent prices are in line with the rest of the metro area – meaning that they are pretty pricey. When seeking an apartment to rent in Coolidge Corner, it helps to have the right resources. You can’t go wrong by connecting with Boston City Properties.

To help you kick-start your search for an apartment to rent in this neighborhood, we’ve highlighted two examples of popular apartment developments that you may consider. Don’t forget to sign up for free, immediate access to our searchable database of MA real estate and apartment rental listings to check current availability. In the meantime, here are a few top picks: